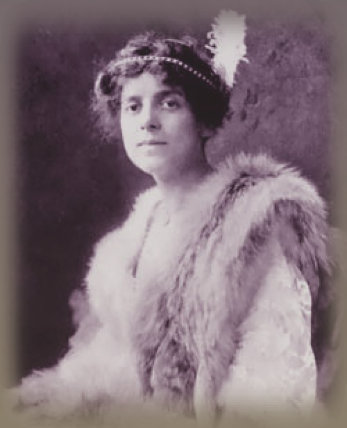 SHORT BIOGRAPHY OF PEARL CURRAN:
Pearl Lenore Curran was born in Mound City, Illinois on February 15, 1883 to Mr. and Mrs. George G. Pollard. Her parents moved to Fort Worth, Texas when Pearl was about eight months old. At about age four, she was sent to St. Louis Missouri to live with her grandmother, uncle and aunt for a year due to her mother's poor health but later she returned to Texas.

According to Mrs. Curran, she started to grade school in Texas at about six years old but was not interested. She was an average student, perhaps more inclined to play than to learn. She eventually moved on to high school where at thirteen years old she reported that she "broke down of too much piano, elocution, Delsarte, school and entertainments and was sent to the Catholic St. Ignatius' Academy for "rest".
Pearl wrote that she "...was confused in Texas by no plan of education, and no aim. I absorbed much, and lived out of doors, roaming the prairies and romping with my dog. I loved flowers, was generally honest, rather vain of clothes, thought I was homely and felt it keenly. I had been laboring with a congenital
eye-trouble also. I had had measles, mumps and chicken-pox,also a throat trouble for which my tonsils were removed,other wise, had not been ill."

Her family then moved to St. Louis where she and her parents lived with her aunt and her grandmother, her father having lost everything financially and her mother too "ill and nervous"
to maintain the home. She was sent to Washington School in St. Louis for a year or so where she was "put back" causing her to become discouraged.
Pearl Lenore Curran